It’s a garage makeover more than likely to frighten off unwanted attention from trick or treaters.

An inventive artist has created a Halloween-inspired collection of garage covers, including designs of the grim reaper and Dracula’s gothic den. The amazing 3-D images by Thomas Sassenbach give the impression that all manner of spooky spectacles have taken residence in their owner’s garage next to the usual discarded paint cans and DIY equipment. 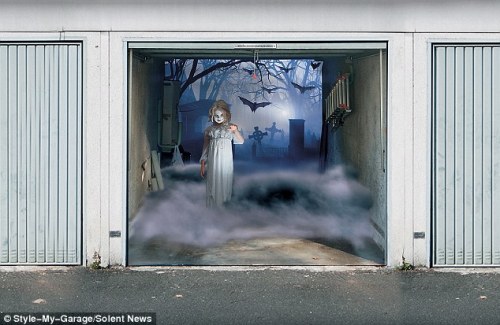 One of the creations gives the illusion of a giant pumpkin lurking under the garage shutters, while another tricks passers-by into thinking an eerie ghost is guarding the space for the owner’s family vehicle. Another design is guaranteed to ward off unwanted attention from garage thieves or trick or treaters, as it shows a terrifying image of the grim reaper armed with a giant scythe inside the garage. 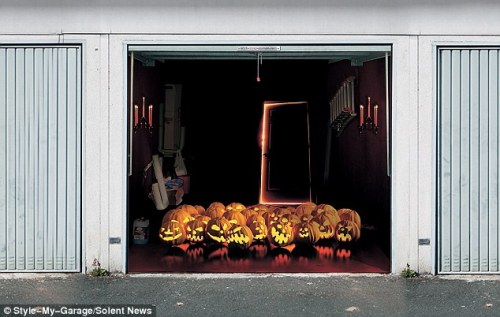 Mr Sassenbach’s garage door covers, which are made from weather-resistant tarpaulin and can be attached to doors with velcro. The 47-year-old artist said they are more than likely to give your neighbors a scare. He said: ‘I wanted to bring a sense of fun and style to garages and so I came up with head-turning designs. ‘The photo tarpaulins for the garage door are a really cool idea and a real eye-catcher. ‘At last, there’s a riot of color on sad garage doors. 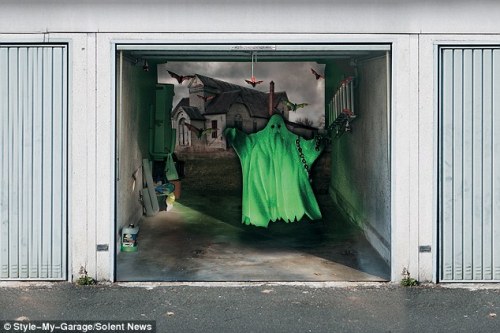 The Halloween motifs are aimed at everyone who is crazy about Halloween and wants to show it.